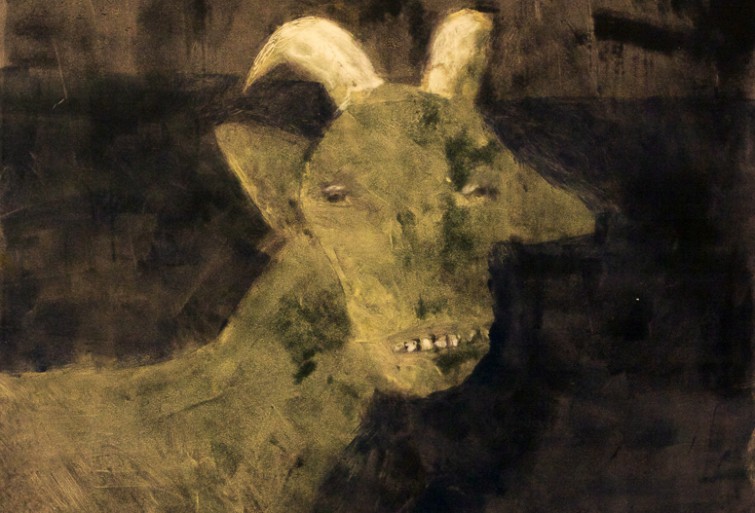 Greenwich artist tells his story, one image at a time

Malcolm Moran may work in a studio ensconced in a quintessential New England home, but his images belie more tropical and exotic roots.

“Growing up in New Orleans, these were right outside my window,” said the Greenwich artist of the palm tree that rises amid brightly colored roofs in “Palm No. 4,” a large painting that sits in a corner of his studio. “New Orleans is an endless well of memories that are very vivid and very real for me.”

Since he was a child, recording the world around him was less about reaching for words or numbers and more about taking a crayon or pencil to paper. The images, serving as a visual journal, were a way to document and make sense of his experiences. Given his life’s journey, he already has had a lot to say.

One can see the influences of a childhood spent in New Orleans and Mexico, a brief sojourn on a Greek island (where he would watch goats scamper a yard away) and trips taken with his father to Central America in the 1960s.

“He was a very adventurous person,” said Moran of his father, who would think nothing of piloting his single engine plane toward adventures unknown, his small son in tow. The two might go looking for Mayan ruins in Guatemala or explore exotic jungles.

Moran can be inspired by a video, his dreams, a photo, the work of another artist, biblical tales or someone who he has passed on the street. Horses also dominate, which Moran attributes to a harrowing experience more than 50 years ago, when he was only 7. Then living in Mexico, he was riding a horse in the Sonoran Desert when it bolted.

“I stayed on the horse, but barely,” he said, adding that it stopped only when it wanted some cactus berries. “I’ve been painting ever since.”

He’s also been drawing, and, most recently, print-making. On the day he welcomed guests to his studio, he was working on a print, “His Horse and His Ride Returning, No. 5,” which was inspired by that ride — evoking the helplessness and humility he experienced that day.

Such is the process behind Moran’s art. No words are necessary in the retelling of a story or emergence of a memory. The image, the colors, the juxtaposition of the objects are meant to convey the meaning. He calls his art a “language, the most natural way by which I can express things that are important to me.”

“His exploration is so personal,” said Christopher Shore, master printer at the Center for Contemporary Printmaking, who worked with Moran for the center’s show, “The Beast and His Keeper,” which features a selection of Moran’s prints. It runs through Sunday, May 25. “He might meet somebody or see something and he is inspired to capture it.”

When Moran sits down to create, he said he waits for his “visual” stories to bubble up, letting the initial image guide his hands as he begins to draw or paint. “They emerge all the time,” he said.

Moran has never seen his art as an exclusive passion, but rather the best way to express himself in a life full of unexpected turns. He worked as a banker in the 1970s in New York City, often slipping away to the Art Students League to draw daily for hours. With a growing body of work, he decided to “focus on what I wanted to do,” and applied to several art schools, picking the Rhode Island School of Design. He entered in 1979, eventually earning a degree in painting and spending nearly a decade in Providence with his family.

He would return to run his family’s publishing and printing company based in Louisiana in the 1990s. About 14 years ago, he sold the business and moved to Greenwich, his wife Elissa’s hometown. Since then, he has focused exclusively on his art.

Shore said Moran has built up a large visual vocabulary that he can access to fulfill his vision. “He’s had years of assembling ideas and colors, (so the printing process) was very intuitive,” he said.